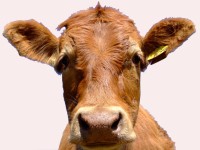 Researchers discovered that cattle have a good sense of direction and tend to point in a northerly direction.

It has long been observed that cows appear to have a talent for weather forecasting and are able to predict when rain is on the way, but until now their navigational abilities have been largely ignored.

Their innate ability to find north is believed to be a relic from the days when their wild ancestors needed an accurate sense of direction to migrate across the plains of Africa, Asia and Europe.

Dr Sabine Begall and colleagues from the University of Duisburg-Essen looked at thousands of images of cattle on Google Earth in Britain, Ireland, India and the USA. They also studied 3,000 deer in the Czech Republic. The deer tended to face north when resting or grazing.

Although, in many cases, the images were not clear enough to determine which way the cattle were facing they were aligned on a north/south axis.

The scientists concluded that they were behaving in the same way as the deer.

Huge variations in the wind direction and sunlight in the areas where the beasts were found meant that the scientists were able to rule out those factors as being responsible for the direction they were facing.

“We conclude that the magnetic field is the only common and most likely factor responsible for the observed alignment,” the scientists wrote in an article published in the Proceedings of the National Academy of Sciences journal.

It is already known that many species use the Earth’s magnetic field to navigate across the planet. Examples include migratory turtles, salmon, termites and birds.

Animals are thought to use their own internal magnets made of crystals of magnetite. Homing pigeons have a small amount of the substance on their beaks, which gives them their uncannily accurate powers of navigation.