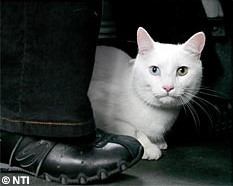 Bus drivers have nicknamed a white cat Macavity after it has started using the No 331 several mornings a week.

The feline, which has a purple collar, gets onto the busy Walsall to Wolverhampton bus at the same stop most mornings – he then jumps off at the next stop 400m down the road, near a fish and chip shop.

The cat, nicknamed Macavity, has one blue eye and one green eye

The cat was nicknamed Macavity after the mystery cat in T.S Elliot’s poem. He gets on the bus in front of a row of 1950s semi-detached houses and jumps off at a row of shops down the road which include a fish and chip shop. 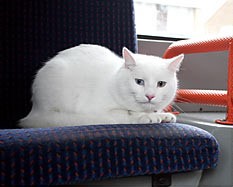 “The next day I pulled up on Churchill Road to let a couple of passengers on. As soon as I opened the doors the cat ran towards the bus, jumped on and ran under one of the seats, I don’t think any of the passengers noticed.

“Because I had seen it jump off the day before I carried on driving and sure enough when I stopped just down the road he jumped off – I don’t know why he would catch the bus but he seems to like it. I told some of the other drivers on this route and they have seen him too.”

Since January, when the cat first caught the bus he has done it two or three times a week and always gets on and off at the same stops.