Nine days until Sony?s PlayStation 3 launches in America, and lines are already forming. 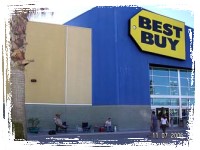 A CAG forumer went to Best Buy this morning and saw about 7 people waiting outside. He went inside and one of the workers told him that they had been there since Monday. He immediately pondered: ?Do these people have no lives??

Of course the life of the waiting-in-line-for-almost-two-weeks PS3 fans isn?t made easier by a bunch of people coming to Best Buy and making funny remarks like: ?I hope you guys brought enough food!? Another one said, ?Where is the line for PS4? Is it on the other side??

Sheriff’s officials in Palmdale, Calif. say deputies shut down a Super Wal-Mart in Palmdale after a crowd of shoppers camped out for a chance to buy PlayStation 3 got rowdy.

Deputies were called to the store when the crowd of 75 to 100 PlayStation seekers started getting unruly Wednesday night around 10:30 p.m. — a full day and a half before the game machine goes on sale.

Wal-Mart officials say deputies decided to shut the store down for the evening and disperse the crowd after some of the waiting customers started running around inside the store.