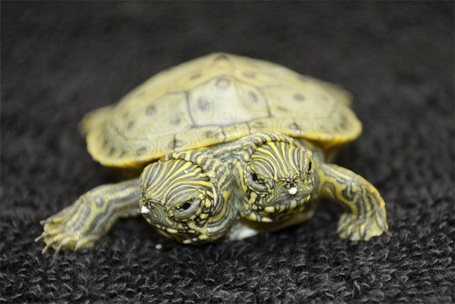 A two-headed turtle has hatched at the San Antonio Zoo and officials have named her Thelma and Louise.

The female Texas cooter arrived June 18 and will go on display Thursday at the zoo’s Friedrich Aquarium.

Zoo spokeswoman Debbie Rios-Vanskike (van SKYKE’) said Wednesday that the two-headed turtle appears healthy and is able to swim and walk. She says experts at the zoo don’t foresee any health issues for Thelma and Louise, named for the female duo in the 1991 Oscar-winning road movie of the same name.

The San Antonio Zoo is no stranger to two-headed reptiles. The facility was home to a two-headed Texas rat snake named Janus from 1978 until the creature’s death to 1995.