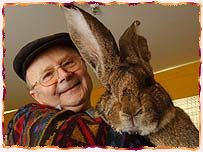 Herman could be ‘world’s biggest bunny’

A man has been showing off his gigantic rabbit named Herman.

The mighty bunny weighs a massive 7.7kg, and his ears are a lengthy 21cm – almost as long as most pet rabbits are tall. And he is almost 1m tall.

The German Giant is even big for his breed, which usually tip the scales at around 6kg.

Herman lives in a specially built solid oak hutch and chomps his way through just over 2kg of food a day. His owner says his favourite snack is lettuce.

The giant bunny, who lives in Berlin with owner Hans Wagner, also takes a vitamin supplement to keep him healthy, and munches through a bale of hay a week.

Herman could be the world’s biggest rabbit, but Guinness World Records have stopped accepting entries because of fears people were over-feeding their pets.

German Giants do not exist in the wild, and have been developed by breeders.

They can live for as long as 12 years.