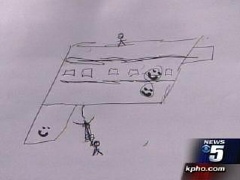 A 13-year-old boy has been suspended for three days by an Arizona public school because he sketched a picture that resembled a gun, something school officials said they “absolutely” believed could pose a threat.

“My son is a very good boy,” Paul Mosteller told the television station. “He doesn’t get into trouble. There was nothing on the paper that would signify that it was a threat of any form.”

The principal at Payne Junior High School kept the actual drawing, and officials with the Chandler Unified School District declined to release any information about the situation.

Mosteller said her son was just idly drawing pictures, and ended up with a fake laser.

School officials who initially banned the student for five days lowered the penalty to three days after discussing the situation with the boy’s father.

“I just can’t believe that there wasn’t another way to resolve this,” Mosteller told the Associated Press. “He’s so upset. The school made him feel like he committed a crime. They are doing more damage than good.”

The drawing did not show blood or bullets. Nor did it show injuries or target anyone, the Mostellers said. It just resembled a gun.

Terry Locke, a spokesman for the district, told the AP the sketch was “absolutely considered a threat,” and threatening words or pictures are punishable.

However, the school failed to contact police, and failed to provide counseling or an evaluation for the student to determine if he intended it as a threat, officials said.

The student’s father, Ben Mosteller, said school officials told him how serious they considered the situation, and discussed the 1999 massacre at Colorado’s Columbine High School, where two teens shot and killed 12 students and a teacher, and injured dozens more.

That, he said, was extreme and offensive. The family already has contacted the district’s governing board about the incident.

The station said it checked the rules students must follow at school, and found there’s nothing in a portion of the student handbook that addresses conduct to indicate the drawing of a weapon poses threat.
Â© 2007 WorldNetDaily.com