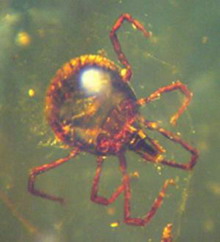 ScienceDaily (Jan. 4, 2008) â€” Asteroid impacts or massive volcanic flows might have occurred around the time dinosaurs became extinct, but a new arguemet is that the mightiest creatures the world has ever known may have been brought down by a tiny, much less dramatic force — biting, disease-carrying insects.

An important contributor to the demise of the dinosaurs, experts say, could have been the rise and evolution of insects, especially the slow-but-overwhelming threat posed by new disease carriers. And the evidence for this emerging threat has been captured in almost lifelike-detail — many types of insects preserved in amber that date to the time when dinosaurs disappeared.

“There are serious problems with the sudden impact theories of dinosaur extinction, not the least of which is that dinosaurs declined and disappeared over a period of hundreds of thousands, or even millions of years,” said George Poinar Jr., a courtesy professor of zoology at Oregon State University. “That time frame is just not consistent with the effects of an asteroid impact. But competition with insects, emerging new diseases and the spread of flowering plants over very long periods of time is perfectly compatible with everything we know about dinosaur extinction.”

This concept is outlined in detail in “What Bugged the Dinosaurs? Insects, Disease and Death in the Cretaceous,” a book by George and Roberta Poinar, just published by Princeton University Press.

In it, the authors argue that insects provide a plausible and effective explanation for the slow, inexorable decline and eventual extinction of dinosaurs over many thousands of years. This period is known as the famous “K-T Boundary,” or the line between the Cretaceous and Tertiary Period about 65 million years ago. There is evidence that some catastrophic events, such as a major asteroid or lava flows, also occurred at this time — but these provide no complete explanation for the gradual decline of dinosaur populations, and even how some dinosaurs survived for thousands of years after the K-T Boundary.

Insects and disease, on the other hand, may have been a lot slower, but ultimately finished the job.