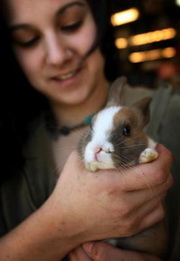 A Connecticut pet shop worker found the nosey bunny in a delivery of 6-week-old dwarf rabbits that arrived at the Milford store last week. Both noses have two nostrils.

The owner of the Purr-Fect Pets shop says he’s never seen anything like it in 25 years in the business. He says the bunny eats, drinks and hops around like the rest of the litter.

Beardsley Zoo director Gregg Dancho says the deformity could be the result of too much inbreeding or the parents’ exposure to pesticides or poisons.

Store workers have begun a naming contest with Cyrano de Bergerac and Deuce among the contenders so far.