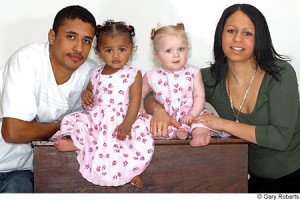 When Kylie Hodgson gave birth to twin daughters by caesarean section, she was just relieved that they had arrived safely.

It was only when the midwife handed them over for her to hold that she noticed the difference between them.

“It was a shock when I realised that my twins were two different colours,” said Kylie, 19. “But it doesn’t matter to us – they are just our two gorgeous little girls.”

The amazing conception happened after two eggs were fertilised at the same time in the womb.

Both Kylie and her partner Remi Horder, 17, are of mixed race. Their mothers are both white and their fathers are black.

According to the Multiple Births Foundation, baby Kian must have inherited the black genes from both sides of the family, whilst Remee inherited the white ones.

Kylie, from Nottingham, discovered she was pregnant in the summer of 2004 and a scan at the Queen’s Medical Centre revealed that twins were on the way.

“It was a shock at first to discover I was expecting as we hadn’t been trying for a family,” she said I had my 14-week scan and the sonographer ran the scanner over my stomach and announced that I was carrying twins.

“We couldn’t believe it. Neither of us could take our eyes off the scanner – you could just see two of everything, even the outline of their little noses. We were both overwhelmed.”

The twins were born by caesarean in April last year because one of the girls was lying in an awkward position in the womb.

“I didn’t see them at first,” added their mother. “They were both whisked away to be checked over and then the midwife came back and placed them both in my arms.

“I noticed that both of them had beautiful blue eyes, but whilst Remee was blonde, Kian’s hair was black and she had darker skin.

“It seemed strange, but I was feeling so ill that I didn’t really take it in at that stage.”

The next day she mentioned the colour difference to her mother, who told her that Remee’s skin would darken as she grew older.

“There are some similarities between them,” said their mother. “They both love apples and grapes, and their favourite television programme is Teletubbies.

“If they haven’t seen each other for a few hours, they are so pleased to see each other and will hold out their arms, wanting to hug each other. And their smiles just light up their faces.

“I’ll explain it all to them when they get older about why they look so different.”

Million to one odds

The odds against of a mixed race couple having twins of dramatically different colour are a million to one.

Skin colour is believed to be determined by up to seven different genes working together.

If a woman is of mixed race, her eggs will usually contain a mixture of genes coding for both black and white skin.

Similarly, a man of mixed race will have a variety of different genes in his sperm. When these eggs and sperm come together, they will create a baby of mixed race.

But, very occasionally, the egg or sperm might contain genes coding for one skin colour. If both the egg and sperm contain all white genes, the baby will be white. And if both contain just the versions necessary for black skin, the baby will be black.

For a mixed-race couple, the odds of either of these scenarios is around 100 to one. But both scenarios can occur at the same time if the woman conceives non-identical twins, another 100 to one chance.

This involves two eggs being fertilised by two sperm at the same time, which also has odds of around 100 to one.