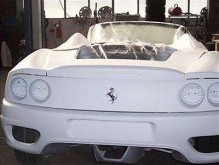 ROME (Reuters) – Italians are used to buying bogus Gucci bags or Rolex watches to look stylish but police found a new height of craftsmanship and cunning when they broke up a ring selling fake Ferrari cars for a fraction of the real price.

Police accused 15 people of building the blood red sports cars and selling them to car fanatics on a budget, most of whom knew they were buying a counterfeit classic.

Car body workers who police called “very able” cobbled together mostly fake parts and a few original components. They used body parts from other makes of automobiles, such as chassis, roofs, hoods, trunks and doors.

The body parts were modified to look like Ferrari classics such as the 328 Gtb, which went out of production in the late 1980s.

Some of the cars sold for about 20,000 euros, about a tenth of the going price for some versions.