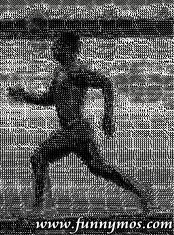 ”
ANN ARBOR, Mich. – A marriage-minded man ran naked through his neighborhood, trying to show his hesitant girlfriend that taking risks is important. He got more than he bargained for when he ended up being chased and shot at.

“Just when you thought you had heard everything,” Ann Arbor police Detective Sgt. Jim Stephenson told The Ann Arbor News.

The couple were discussing marriage early Wednesday when the woman said she wasn’t sure if she was ready, according to Ann Arbor police reports. The man responded that taking risks is an important part of life and, to prove his point, jumped out of a first-floor window and ran naked across the street.

Before he could return, he spotted a couple walking and hid in some bushes to avoid them. A 28-year-old man noticed the bushes rustling and bare feet underneath, then drew a .40-caliber handgun and ordered the naked man out, police said.

The naked suitor ran away, but the armed man gave chase and threatened to shoot, police said. The gunman fired a shot and the naked man fell to the ground, suffering minor injuries.

A resident called police, who arrested the gunman on charges of aggravated assault and carrying a concealed weapon. He was taken to the Washtenaw County jail but released following further investigation, police Sgt. Patrick Hughes told The Associated Press.

The naked man was not arrested and didn’t want to pursue charges, Hughes said.
”