I’ve just found this picture and it’s very recent – billboard is still up at this moment. A woman named Emily from Jersey discovered that her husband Steven is cheating with her best friend. Unlike other women, she took stand and started to get back on Steven. Way to go Emily! More details on her blog, That Girl Emily

This billboard is up for 14 days near Steven’s office. 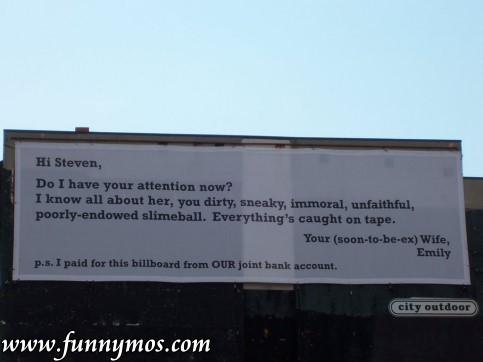 More details about the picture here

later edit: It’s confirmed, it’s a viral ad. Nobody knows for what though at this time. It was pretty catchy, so the whole thing was a struck of genius if you ask me.