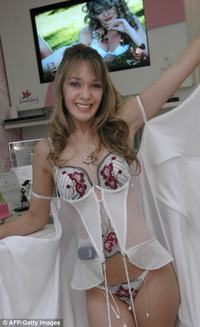 Feminists around the world have reacted with horror to a new line of lingerie that comes equipped with a GPS tracking system.

The ‘find me if you can’ range of underwear has been described as a modern-day, high-tech chastity belt.

‘It is outrageous to think that men can buy this, programme it and give it to their partners and then monitor them,’ said Claudia Burghart, leader of a Berlin feminist group.

‘It is nothing more than a chastity belt for insecure men.’

The lingerie combination set consists of lace bodice, bikini bottom and faux pearl collar, with the GPS device nestled in the see-through part of the bodice next to the waist.

‘This collection… is a wink to women and a challenge to men because, even if she gives him the password to her GPS, she can always turn it off,’ Lorio said.

‘It’s not a modern chastity belt. Some men think they can keep tabs on their girlfriends with it, but they’re wrong,’ she added.

Unconcerned with the controversy her collection has raised, Lorio is also dismissive of the global financial crisis and its adverse impact on luxury items sales.

The GPS lingerie sells from a cool £500, complete with a standard Global Positioning System, to £700 with a more advanced model.

‘Some women are now interested in buying it for protection,’ she said, programming it for partners themselves so they are safe on a night out alone.

‘In London, New York, Rio de Janiero – wherever there is danger, the underwear may prove to be a lifesaver,’ she added.

But feminists in her homeland have called her a modern-day slaver and urged women to boycott the GPS underwear.