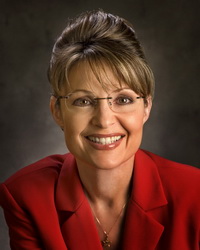 TORONTO – Sarah Palin unwittingly took a prank call Saturday from a Canadian comedian posing as French President Nicolas Sarkozy and telling her she would make a good president someday.

The Republican vice presidential nominee discusses politics, the perils of hunting with Vice President Dick Cheney, and Sarkozy’s “beautiful wife,” in a recording of the six-minute call released Saturday and set to air Monday on a Quebec radio station.

“Governor Palin was mildly amused to learn that she had joined the ranks of heads of state, including President Sarkozy and other celebrities, in being targeted by these pranksters. C’est la vie,” she said.

The call was made by a well-known Montreal comedy duo Marc-Antoine Audette and Sebastien Trudel. Known as the Masked Avengers, the two are notorious for prank calls to celebrities and heads of state.

Audette, posing as Sarkozy, speaks in an exaggerated French accent and drops ample hints that the conversation is a joke. But Palin seemingly does not pick up on them.

He tells Palin one of his favorite pastimes is hunting, also a passion of the 44-year-old Alaska governor.

“I just love killing those animals. Mmm, mmm, take away life, that is so fun,” the fake Sarkozy says.

He proposes they go hunting together by helicopter, something he says he has never done.

“Well, I think we could have a lot of fun together while we’re getting work done,” Palin counters. “We can kill two birds with one stone that way.”

The comedian jokes that they shouldn’t bring Cheney along on the hunt, referring to the 2006 incident in which the vice-president shot and injured a friend while hunting quail.

Playing off the governor’s much-mocked comment in an early television interview that she had insights into foreign policy because “you can actually see Russia from land here in Alaska,” the caller tells her: “You know we have a lot in common also, because … from my house I can see Belgium.”

She replies: “Well, see, we’re right next door to different countries that we all need to be working with, yes.”

When Audette refers to Canadian singer Steph Carse as Canada’s prime minister, Palin replies: “Well, he’s doing fine and yeah, when you come into a position underestimated it gives you an opportunity to prove the pundits and the critics wrong. You work that much harder.” Canada’s prime minister is Stephen Harper.

Palin praises Sarkozy throughout the call and also mentions his wife Carla Bruni, a model-turned-songwriter.

“You know, I look forward to working with you and getting to meet you personally and your beautiful wife,” Palin says. “Oh my goodness, you’ve added a lot of energy to your country with that beautiful family of yours.”

The Sarkozy impersonator tells Palin his wife is “so hot in bed” and then informs her that Bruni has written a song for her about Joe the Plumber entitled “Du rouge a levres sur une cochonne” — which translates as “Lipstick on a Pig.”

Democratic presidential candidate Barack Obama derided his Republican challenger John McCain’s call for change in Washington as “lipstick on a pig,” days after Palin made a lipstick joke at the Republican convention. The McCain-Palin campaign then released an ad implying Obama was calling Palin a pig with that remark.

He also tells the Alaska governor that he loved the “documentary” made about her and referred to a pornographic film with a Palin look-alike made by Hustler founder Larry Flynt.

The callers then reveal the prank and identify themselves and their radio station.

“Ohhh, have we been pranked?” Palin asks before handing the phone to an aide who ends the call.

Obama’s campaign spokesman Robert Gibbs, commenting on the prank, said: “I’m glad we check out our calls before we hand the phone to Barack Obama.”