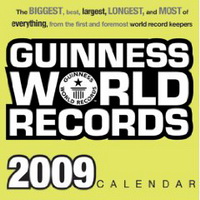 The 54th edition of the Guinness World Records book has been released. In the 2009 version we can find a few interesting world records such as:

Most rotations hanging from a power drill (141)

Many of the records in the book were set on last year’s Guinness World Records Day (November 9) when 200,000 people around the world joined in to make or break records as part of the international event.