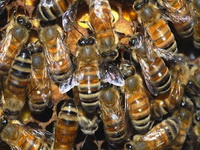 A fly parasite is being blamed for an epidemic that has struck the honey bee population around the world. The parasite nests in the stomach of the bees and causes them to walk in circles, sometimes pursuing bright lights, before eventually dying.

The Parasitic Phorid Fly Apocephalus borealis is responsible for the zombie transformation, laying its eggs inside the abdomen of the honey bee.

“When we observed the bees for some time, the ones that were alive, we found that they walked around in circles, often with no sense of direction,” said San Francisco State University’s Andrew Core lead author on the bee parasite study in the journal Plos One.

Bees usually just sit in one place, sometimes curling up before they die, said Core. But the parasitised bees were still alive, unable to stand up on their legs.

“They kept stretching them out and then falling over,” he said. “It really painted a picture of something like a zombie.”

And while the parasite may be causing immense damage to the honey bees population, there is an upside to their discovery, according to the Mirror, “Scientists discovered the parasite by accident but they believe it may help them discover what is causing colony collapse disorder which is devastating honey bees in Europe and America cutting some populations in half.”

The parasite is believed to be new and similar to one currently affecting the bumblebee population. Scientists are still figuring out exactly how the parasite works, but an early theory by San Francisco State Professor John Hafernik holds that the parasite changes the bees’ “body clocks,” which causes their erratic behavior and deaths.