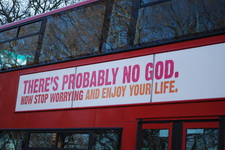 LITTLE ROCK, Ark (Reuters) – A coalition of atheists is accusing Little Rock’s city bus line of violating their rights to free speech in a fight to place ads on public buses praising a God-free lifestyle.

The Central Arkansas Coalition of Reason alleged in a lawsuit that the Central Arkansas Transit Authority and its advertising agency are discriminating against the group because they’re being required to pay tens of thousands of dollars to put $5,000 worth of ads on 18 buses.

The ads would read: “Are you good without God? Millions are.”

Other groups, including churches, have not been required to pay the fee, which amounts to $36,000 in insurance in case of an attack on the buses by angry Christians, according to the lawsuit.

The insurance was requested by the transit agency’s advertising firm, On The Move Advertising, officials said.

Because a handful of similar ads had been vandalized in other states, the ad agency required the payment for insurance reasons, said Jess Sweere, an attorney representing the transit authority.

“To my knowledge, OTMA has not requested this in the past because no other advertiser told them their ads were vandalized in other markets,” Sweere told Reuters.

Sweere said the transit authority was all set to accept the ads, but that the advertising firm raised the concerns that lead to the insurance requirement. Negotiations were still going on when the lawsuit was filed last week against the transit agency and the ad firm.

“We were planning to run the ads as soon as the contract was worked out,” Sweere told Reuters.

An attorney for the ad agency did not return calls seeking comment.

LeeWood Thomas, a spokesman for the atheist group, quoted an email from the advertising agency obtained by the coalition that read: “Arkansas is the buckle of the Bible Belt and I can easily envision zealots or upstanding citizens with a strong faith acting out.”

Thomas said it’s clear his group is being punished for the actions of others.

“The insurance money needed from us basically says CATA and On The Move trust the atheists in this community more so than the religious, otherwise the churches that advertise would have that extra insurance premium added to their total cost,” Thomas said.

The coalition is asking a judge to issue a preliminary injunction forcing the bus company to accept the ads while the suit moves forward.

The transit authority and its advertising agency were served with the lawsuit on Monday. They have 21 days to respond.

The lawsuit was filed on behalf of the Arkansas group by UnitedCoR, a Washington-based national organization that focuses on organizing local atheist and agnostic groups into coalitions and funding their bus and billboard ad campaigns.

UnitedCoR has placed such ads throughout the United States since 2008.

Out of 36 markets where ad campaigns have run, four have been vandalized, including bus ads in Detroit last year, according to UnitedCoR’s website.

In 2009, the Arkansas Society of Freethinkers, a group of atheists who are also involved in the bus ad campaign, successfully sued the state of Arkansas to erect a ‘Winter Solstice’ display on the grounds of the Arkansas State Capitol near a nativity scene.